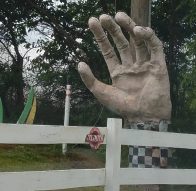 Since I’m camping this weekend, this week’s T.I. comes out a day early.  It flows out of last week’s theme about dogs and ties into the monthly internal focus at Cabal Fang which is the Hand of Mysteries.  The details following are an excerpt from a forthcoming module of my Frontier Rough & Tumble martial arts program. on animal teachers.

Of Hounds and Hands

The words hound and hand likely have the same origin in the Proto-Germanic word handuz.  What does handuz mean?  Well, as with most of these proto-lingual words, which are mostly interpolations and guesses, linguists aren’t exactly sure.  The best guess is “to reach for” or possibly “to obtain.”  I’d add “to grasp” to that list.

Think about it.  That’s what hands and dogs do, right?  Grab and hold?  I don’t believe it’s a coincidence that both seem awfully close to the word “hunt” which means to grab a-hold of something to eat.  Makes sense, doesn’t it, when you consider that hunting dogs are very important whenever and wherever you have to hunt in order to get fed?

Now let’s look at it another way.  One of the oldest symbols known to mankind is the hand outline.  It is very common, found across the globe in cave art created by prehistoric hunters.

Look at the example on the right from the Cave of Hands in Argentina.  These hands were made using a form of prehistoric air-brushing.  The painters placed their hands on the cave walls and used hollow bones to blow colored liquids onto the surface so that a negative would be left when the hand was removed.

The Latin aspiro means “a puff of air.”  An aspiration is an expulsion of air following a choke.  But an aspiration is also a hope, dream or goal which one seeks to obtain, grasp or take hold of — something you hope a favorable wind will blow upon.  Is there a connection here?

So you see, the cave painting above literally screams aspiration.   There is even a target on the far left toward which everything in the entire painting is headed, as if toward some grand intersection.

The artists could have held an animal carcass or bone against the wall and created a negative in the same way the hands were created.  Or the hands could have been sketched to match the style of the animals.  But neither is the case.  The animals and geometric shapes are sketched and the hands are traced with realism.  So why is one sketched and the other rendered using the prehistoric equivalent of a photocopy?

Because the animals are symbolic.  They are the dream, the aspiration, the hope.  But the hands are real.

The animals in the painting are virtually identical.   Because you see, it doesn’t matter what the specific animal is.   Each animal in the picture is at once any animal and every animal.

The painting proclaims that if the human mind can conceive it and believe it, the human hand can achieve it.

DID YOU KNOW…that I have an awesome shop where you can buy all kinds of cool stuff, like martial arts training materials, bespoke books, artwork, and so on?  Check it out!

This entry was posted in Martial arts, Mysticism and tagged hand of mysteries, involution. Bookmark the permalink.