Book Review — Why God Won’t Go Away: Brain Science and the Biology of Belief 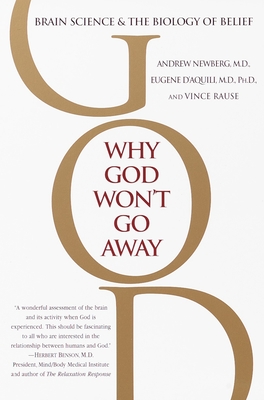 Chapter 1 is entitled, “A Photograph of God? An Introduction to the Biology of Belief.” When you open up a book and you see those words, you understand immediately that you are dealing with authors who are willing to trade in hyperbole and unafraid of laying iron traps of materiality for God. Reading on, you find that what the chapter describes is the manner in which the authors scanned the brain of a subject named Robert, a Tibetan Buddhist, at the height of a meditative experience of oneness.

Serious scientists and theologians, and in fact anyone with a teaspoon of common sense, knows this.  What exactly are the authors trying to prove?  For whom is this book written?

To tease that out, let’s begin with the observation that most people who believe in God understand that God is the ground of being. As a result, there’s no mystery or internal conflict in the observation that the experience of mind is inextricably linked with the vehicle called the brain.  As a Christian, this issue has already been fully explained and illuminated for me.

This passage is eloquently describes the relationship between God, conscousness and matter.  Religious people, who have wisdom literature like this at their disposal, don’t need to see scans of the brains of other believers to know that the experience of deity is real.  Hard scientists and unswerving atheists aren’t likely to be even mildly intrigued by Robert’s brain scans.  That leaves the floundering middle — neither reasoned believers nor scientific atheists — as the target of the book.  And I suspect that is also the camp to which the authors themselves belong.

That’s not to say that Why God Won’t Go Away doesn’t contain some entertaining and valuable insights.  I was impressed by its exploration of how myth and ritual are in fact practical survival instincts.  They do a wonderful job of explaining how the brain works in layman’s terms.  They provide a convincing scientific argument for the integrity of mind and brain, and this might be an eye-opening realization for someone looking for an escape hatch from the iron box of materialism.

And I think that’s the authors’ ultimate goal.  In the final chapters they finally come out and say it.

They are essentially positing the need to create some kind of new, common-denominator religion by starting with the brain and its chemistry.  Why would anybody want to do that?  Because the authors have bought into pop-culture history, atheist tropes, and all of the common snares and traps that snag the naive and hapless and seal them off from a universe filled with God’s wonder and beauty.  The final chapters are peppered with all of the old saws — that the church persecuted Galileo and is the enemy of science, that religion causes wars and strife, and so on. [If you believe this sort of foolishness, please read this.]

The authors believe we need a new religion that doesn’t do what the old ones do.  For those who are floundering in the same manner as the authors, this book may be a ray of light.  But once the light is seen, God awaits us in the great faiths of the world.  We do not need to reinvent the wheel, for in them we will see wheels withing wheels.

If you liked this article, there’s a good chance you’d like one of my books.  They’re available pretty much everywhere, but you can get most any of them in eBook format here.

Why God Won’t Go Away: Brain Science and the Biology of Belief is by Andrew Newberg, M.D. Eugene D’Aquill, M.D., Ph.D., and Vince Rause.

This entry was posted in Writing and tagged book review. Bookmark the permalink.