John Bell over at Hermetic.com is starting to build up a Fundamentals  section at the library — an area that encourages people to get off the sofa, put down the cell phone, and do some real spiritual work.

That sort of thing really resonates with me.

So when he asked me if I’d be willing to come up with a month of daily meditation exercises for his site, I immediately said “Yes!” and began to put together a program based on the Hermetic Cross, a.k.a. the Hermetic Quaternary, a.k.a. the “Powers of the Sphinx.”

What is the Hermetic Cross?

Nobody really knows how old the Quaternary is or where it originated. All we can say is that it was first revealed in Eliphas Levi’s book Dogme et Rituel de la Haute Magie and not widely known until Levi’s book was translated into Transcendental Magic, Its Doctrine and Ritual by A. E. Waite in 1896.  I’ve been working with the Hermetic Cross for almost thirty years, and still each year brings a new insight or two. 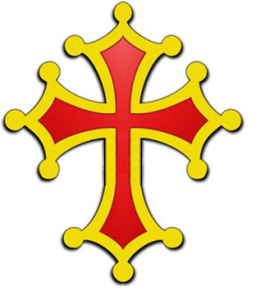 The power of the Cross is not to be taken lightly.

So I’m leaping at the chance to make this deceptively simple framework accessible to a wider audience. There is mystery at the center of the Quaternary that awaits you, but I dare not name it for fear of spoiling the revelation.

Check it out and let me know what you think.

If you liked this post you’ll love like my e-books.  Check them out at Smashwords.com or wherever fine e-books are sold.

From the bolt she measured and paid
Four yards of rope, a triangle squared and laid
A cream-colored coil, a circle wound
She knew the yarn but not the story
The line was cincture bound

Clerical top and layman’s bottom
The fancy top is my pronotum
To hold me tight, arcanely tied
Binds up ego, holds in lies

Into my hand she pressed rope, receipt
I took them both with self-deceit
Rushing off to communion adventure
Unaware of my indenture

Somewhat stilted, self-aware
Involuting, standing there
Trying to be and love and fly
The more I limp the more I try

Meal is over, dalmatic gone
Alb laid by, cincture withdrawn,
The receipt beckons like a prayer
The note she wrote lays be bare

Grand loves yes, but small ones too
Seed the fields and spirit breathe
Small kindnesses, simple things allow
The pupil of the greater eye to see
The true I within the I

Change the Name of the Weekly Training Involution?

Help me decide.  I’m thinking of changing the name of the weekly “Martial Arts Training Involution” to broaden its appeal and reflect its truer nature as a fourfold supporter of my teaching on martial arts, fitness, primitive skills, and spirituality.

It isn’t just a weekly martial fitness thing anymore. Now each contains a martial drill, a fitness piece, a primitive skills angle, and a spiritual exercise.

If I take “martial” out of the name, will people check it out and perhaps ‘eat off the menu’ so to speak?

Have you subscribed to my twice-monthly newsletter yet?  If not click here.

IN THIS Month’s ISSUE…

A 1/3 off coupon for Mitch’s General Store, looking at the eyes of a snake, a review of the documentary The Social Dilemma, the call of the humble grackle (and a handy app for identifying it), and why the mat is always lava…

It is important to remember that the Word of God isn’t either literally true or metaphorically true or philosophically or in way narrowly true.  The Word of God is true intellectually, emotionally, morally and spiritually — in all ways, at all times, for all people — without conflict.  If you sense conflict in the  truth of the Word, the conflict is within you, not within God or His message.

Have you subscribed to my twice-monthly newsletter yet?  If not click here.

IN THIS Month’s ISSUE…

Where the demons are, the tracks of the “arehkan,” how to escape a standing Scarf Hold and the fairy tale “The White Snake”

The newest issue of my twice-monthly newsletter SHIFT is out today!

Click the photo to take a peek.  Almost every issue has some sort of coupon for reduced price downloads of my ebooks or discounts at Mitch’s General Store.

I Know What We Did This Summer 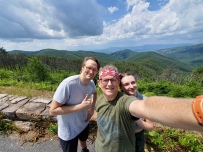 Robert, me and Morgan at the Big Run overlook

My son and his family re-located to Japan.  It is profoundly sad to have them so far away from me.  But rather than be all weepy and mopey, I’m focusing on the positive.

For one thing, I’m really proud I have a son who’s smart enough to land a high-powered international job and courageous enough to take it.

My son lifting with the new Deadlift rig

For another, my son and I had an incredible couple of months.  Due to COVID-related visa snags, my daughter-in-law and two oldest grandsons were allowed in first.  They went over in June to get the boys in school on time.  My son wasn’t allowed in until earlier this week.  This gave us more one-on-one time than most thirty-something sons and almost-sixty-year-old dads can manage.

In no particular order, here’s a rundown of what we accomplished together followed by a photo collage.

Robert on the Deadlift machine

Robert working Squats with the yoke

Cargo boxes and shelf I made with Robert

Me, Mo and Robert on the way to Big Run

Deer by the road

Putting the Petrænigma in front of the Cabal Fang Temple

The banh mi (Thai sub) and shirimp chips I ate after we finished working for the day. Outstanding!

And by the way, the subject of this post is a play on a movie title.  Did you get it?

Roses wilt, sere are petals
fall, fall, fall
forgotten memories return
of my first initiation
of the following repast
and I recall the missing element 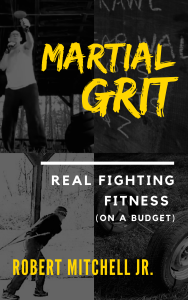 Friends, family and blog-readers only!  Get my next e-book two weeks early for half price just by signing up for my newsletter.  Click here to download it now for only $3.98!  Price goes to $7.99 on release day August 1st.