A Little TJ Love and WOOTW #72 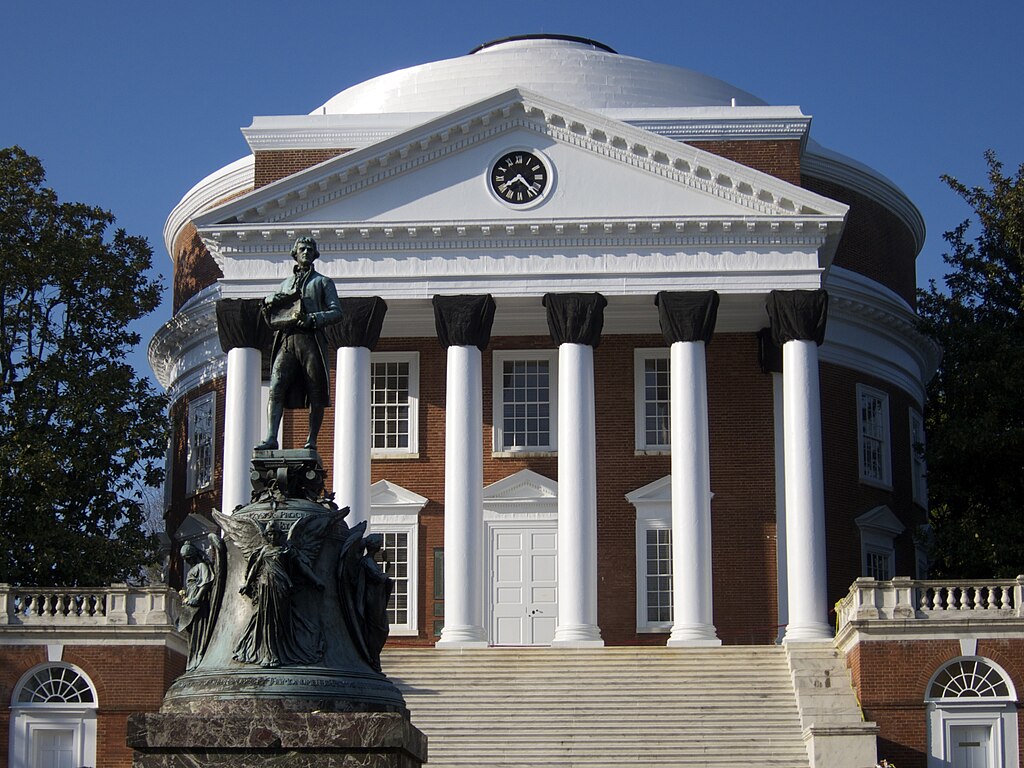 Thomas Jefferson monument at the University of Virginia

Once, late at night, I stood quietly and gazed up at a monument to a great American.

I was a struggling student at the University of Virginia.  I was lost, in the process of flunking out.  And I was thinking about calling it quits.

But then, standing there in the dark looking up, I thought about how fortunate and blessed I was to be at such a fine school founded by such a great man.  By what miracle, I wondered, had a poor, stupid kid like me been admitted this institution?  Why was I being allowed to walk these halls?  What fate had smiled on me such that I had been born to a father willing to work two jobs so that could go?

“Maybe there’s a reason I was admitted that I don’t know.  Maybe I’m more than I think I am.  This is an real honor — who am I to disrespect those who gave me this gift by squandering it?”

I was inspired.  I worked harder.  I expected more of myself.  And yes, I graduated from Mr. Jefferson’s University (A&S ’83.  WAHOO-WA!).  So when I read that BLM protesters shrouded that statue with a tarp and labeled him as a racist and rapist, I can tell you that my spirit rose in anger.  It took a a day or so to calm down and process.

Free speech is our most important right.  Say what you want.  But, in my experience, the best way to make an enemy — short of a personal attack or an assault on a loved one — is to disrespect someone’s heroes and ancestors.  I’ve written about this before.

And I’m wondering if this is going to stop before increasing polarization tears our country apart.

I for one am not going to allow groups looking for trouble to incite me to extreme positions.  I’m refuse to be swayed by agents provocateurs lurking in my friend, family and social media circles.  I’m going to keep popping my filter bubble.

I’m going to remain calm and voice my opinion in ways that breed peace, not violence.  And I really hope that others will do the same.

And now for the workout of the week.

CABAL FANG WORKOUT OF THE WEEK #72: “Pieces of eight”

Did you enjoy reading this?  Then the Cabal Fang book will blow your mind.  Buy a paper copy on Amazon or from Createspace or download the ebook here.

The Gutenberg Bible courtesy of Wikipedia

“Perhaps a sin that humbles you is better than a good deed that makes you arrogant.” -Sheikh Hamza Yusuf

This morning I was browsing and came across the above quote.  I then did a web search on Yusuf and found that he is a Muslim scholar.  His quote struck me as very wise indeed, and not in keeping with the popular perception of Islam.  I searched around a bit and found other bits of Muslim wisdom.  I realized that my knowledge of the religion is poor when compared to others.  Clearly I have some reading to do.

And yet, although I don’t know as much about Islam as I should, I have a suspicion that Islam has much in common with most of the world’s mainstream religions.  They all seem to have the same basic issue:

Tradition and belief in a Holy Book doesn’t allow the devoted to jettison outdated material and  abandon ideas that are out of step with the modern world — prohibitions against contraception, beliefs in creationism, oppression and/or hatred of outsiders (women, gays, other races and faiths, etc. etc.) and may others.

In order to avert Collapse (name your poison: Ecological, Environmental, Economic, Political, etc.) humanity will need to turn away from fundamentalism and embrace change and growth.  Holy books must be edited and revised, and all of the vengeance and hate expunged.  Sadly, to my knowledge there is only one quickly-becoming-mainstream religion that believes each individual should create his or her own personal Holy Book, and that no single one is any better or worse than any other.  The sad thing is, I bet most of my readers have no idea which religion that is.

Islam gets lots of bad press, but then all of the mainstream religions do.  Critics of religion always point to distasteful passages that the average believer tries to ignore.  If believers had the courage to evolve and grow, to expand their understanding, to edit out things that just don’t make sense anymore — kind of the way Thomas Jefferson did when he produced his now-famous Bible — imagine the respect they would garner from critics and non-believers.  Imagine the effects on the world we live in.

What if, for example, a powerful religious leader removed Leviticus 20:13 from his official version of the Bible (the passage saying the punishment for homosexuality is death)?  What effect might that have, not only on the leader’s flock, but on the world?

If the object has been to worship books, the mainstream religions have done an excellent job.  But if there is a God or Gods, I suspect He/She/They have entirely something else in mind.

Do You Fear Liberty?

Are you so afraid of being bombed that you’d submit to a scan or a stipsearch?  So afraid of Al Qaeda that you approve of extraordinary rendition, violation of habeas corpus, and prisons like Guantanamo Bay?   Do you fear the truth so much that you’d approve of sanctions against Wikileaks and Julain Assange?

Jefferson said, “We are not afraid to follow truth wherever it may lead” and “Our liberty depends on the freedom of the press, and that cannot be limited without being lost.”

If you fear the truth then you fear Liberty.