My Ordination and Realization

You could’ve knocked me over with a feather when I got an email from the seminary stating that I was one of just four people selected to be sent on an all-expense-paid trip to New York City to participate in the consecration of bishops and to be ordained as a deacon.  I accepted the honor — and the responsibility — and off I went to Brooklyn, NY.

Acolyte Vinny carrying in the processional cross and yours truly carrying the Holy Gospel. I’m supposed to be holding it aloft — one of the many mistakes I made that day. Beside me is sub-deacon Jeremy Di Salvo 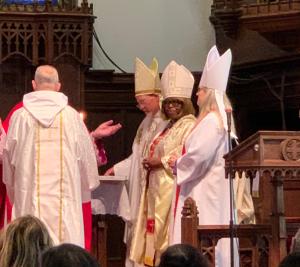 The consecration of bishops. That’s me blocking Bishop Evans (I was holding the liturgy book for him). The three bishops left to right are Bishop Erik, Bishop Linda, and Bishop Angela.

Another angle on the consecration of bishops.

The receding processional. In the background on the left are Fr. Clyde Kuemmerle and Mother Gabriella Velardi Ward 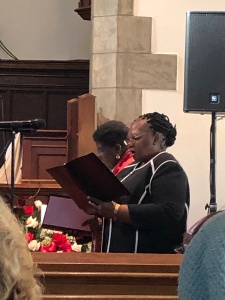 Pastor Cynthia Jackson of the Church of the Evangel (L) and her deacon (R) sing for us. 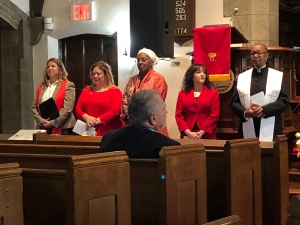 These are the leaders of several other local faith groups who came to give our bishops their blessings. Left to right they are Rev. Wendy Van Allen of One Spirit Learning Alliance, Jacqueline Melamed, Dr. Khadijah Matin, Lynn Vera, and I cannot remember the last reverend’s name to save me.

Long view of the Church of Evangel, Brooklyn, NY

Yours truly getting ready to head to the airport. This was the first time I was ever in the public eye in clerical attire.

Program for the diaconate and subdiaconate ordinations

Reverse of the ordination program

Program for the consecration of bishops

And so, on November 30th of 2019, on the Feast of St. Andrew the Apostle at the Church of the Evangel, in Brooklyn, NY, Ekklesia Epignostika Church and Seminary consecrated new bishops and ordained new deacons and sub-deacons — and I was there to help.

Bishops Linda Blakeney Jarvis, Erik Eberle Weaver and Angela Elizabeth DeBry were those officially consecrated, Bishop Benjamin Evans of the Old Catholic Diocese of New Jersey presiding.  Later in the day Jeremy Di Salvo was ordained as a sub-deacon and I was ordained as a deacon.

This is my chalice and paten set from the church supply catalog. I didn’t feel comfortable taking a picture of the actual set gifted to me by Bishop Linda. Now that they’ve held the wine and host and have been consecrated, they are too holy to be photographed.

The high point was being taught the preparation of the Holy Eucharist by Father. Clyde.  As an additional honor, Father Clyde selected my new chalice and paten to be used during both services that day.  He showed me how to fill the burse, fold and prepare the corporal and the purificator, etc.  For someone who believes that the wine and the host are the body and blood of Christ, and that the Eucharistic Rite is at the center of the Christian life, it was amazing and beautiful and  too much for words.

So it’s official — I’m a clergyman.

The funny thing is, this was sort of written in the stars.  Years ago, when my girls were little and I was an Accounting manager, I thought about making a career change.  It must have been somewhere around 1993.  I decided to go over to J. Sargeant Reynolds Community College and take their career placement test.  It was a long and complicated evaluation, taking over 2 hours.  I took the test and a few days later I went to meet with a counselor to review and interpret my scores.  What were the results?  Clergy.  “Clergy?” I thought.  “Seriously?  A preacher?  You have to be kidding.  This test was a stupid waste of time!”

And now here I am.  Now I’m an Accounting Director — but I’m also a deacon.  Bishop Linda said that I was born to wear the collar — one of the finest compliments I’ve ever been paid.  And you know what?  She’s right. I was a nervous wreck leading up to the event.  I was terrified about traveling in clerical attire and worried sick about botching my lines.  I kept imagining worst-case scenarios — tripping up, spilling the wine, dropping the host.

But once I put on that black suit everything changed.  I was as relaxed and as comfortable as I am wearing a Karate uniform or a pair of sweat pants.  And that relaxed, easy comfort didn’t go away.  When I was in front of the congregation I was perfectly calm, even when I read the Holy Gospel.  The selection I was given to read was the Parable of the Lost Sheep.

Now the tax collectors and sinners were all drawing near to hear him. And the Pharisees and the scribes murmured, saying, “This man receives sinners and eats with them.”

So he told them this parable: “What man of you, having a hundred sheep, if he has lost one of them, does not leave the ninety-nine in the wilderness, and go after the one which is lost, until he finds it?  And when he has found it, he lays it on his shoulders, rejoicing.  And when he comes home, he calls together his friends and his neighbors, saying to them, ‘Rejoice with me, for I have found my sheep which was lost.’  Just so, I tell you, there will be more joy in heaven over one sinner who repents than over ninety-nine righteous persons who need no repentance.

Some friends and even family members didn’t know I was in seminary until I had to explain where I was going.  I don’t talk about it all that much, for several reasons.  Firstly, I want to keep my ego small.  My pursuit of the priesthood is between me and God, and someday, my flock.  Secondly, I don’t want anyone to treat me differently.  And thirdly, I’ve never trusted people who flaunt their religiosity.  Christ said to pray in private, not in the streets (Matthew 6:1-6) and I take that seriously.

Since the ordination the question I get asked most is “I thought priests couldn’t be married?”  Well, that’s Roman Catholics.  I’m an Old Catholic.  Old Catholics and Eastern Catholics admit priests who are married, and many Old Catholics even ordain female priests.  If you want to know more about Old Catholics, check out the information below.

If things go as planned I’ll be ordained as a priest in a year or two.  What happens then?  Who knows.  I’m praying about that, and I will go and do whatever God wills for me.

That is, after all, the point.

What is an “Old Catholic?”

Old Catholics were part of the Roman Catholic Church until Vatican 1 in 1874 when the Immaculate Conception was made dogma and the Bishop of Rome was made a Bishop above all other bishops. Half of the bishops left the Council.  The remaining half voted to to change the governance of the Catholic Church despite the schism.

Five bishops in Holland, Switzerland & Germany set out the Doctrine of Utrecht stating they would adhere to the “old” governance of the Catholic Church with all bishops being co-equal.  Old Catholicism was born.

As a result, Old Catholics recognize the pope as the western patriarch yet do not adhere to Roman Catholic canon law.  In the eyes of Rome, the Old Catholic Church is considered illicit but not illegal — schismatic but not heretical.  In Europe there is a union of Old Catholic Churches with a presiding bishop, but in the U.S Old Catholics are either autonomous or grouped in loose affiliations.