The Only Trekkie Who Liked “Into Darkness” 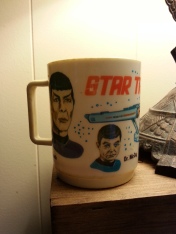 Definitive proof that I’m a trekkie. This is the actual, vintage Star Trek mug that I think I mail-ordered from the back of a cereal box in 70s. On the bottom it says, “DEKA
Elizabeth NJ
14
269
Made in USA”

Don’t know how I missed this news from last year, but it seems that Star Trek: Into Darkness was voted by fans as the worst movie in the Star Trek canon.  Seriously?  I’m floored by that.

I get that we hardcore trekkie’s like the hard stuff — hard science, hard social commentary, hard relevancy.  I understand that we prefer slower-paced, thinking-man’s Sci-Fi flicks.

But this movie, although it was action-packed and fast-paced, was true to the spirit of original TV show.  It took a a solid message about terrorism and wrapped it in a tasty nougat of action.  So what if it wasn’t “hard science fiction?”  Was Space Seed, the original episode on which it was based, hard science fiction?  Was Spock’s Brain?  Was it that you didn’t like the message?  Well, did you like the anti-feminist message of the episode Turnabout Intruder?

Pine, Quinto, Saldana, Pegg and Urban have captured the essence of the characters beautifully in these reboots.  And, like the original TV series, these new movies are a mix of action, humor, pathos, and relevancy.  I just don’t understand why my fellow hardcore trekkies are nitpicking them to pieces!

If you’re a hardcore trekkie who can’t stand the new movies, please fess up.  What’s the real reason you don’t like them?  There has to be something you’re not telling me.

This entry was posted in Writing and tagged deka, mug, Sci-Fi, star trek. Bookmark the permalink.

6 responses to “The Only Trekkie Who Liked “Into Darkness””