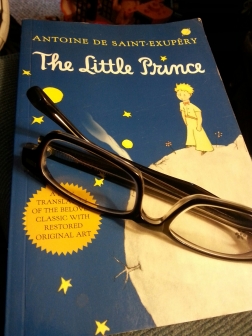 I’m a big fan of Saint-Exupéry.  Wind, Sand and Stars is one of my absolute favorite books, and I had been meaning to read The Little Prince for a long time.  I finally got around to it last week.

I was not disappointed, to say the least.  It is another masterpiece.

Saint-Exupéry’s strength is in his ability to uncover a truly original nugget of wisdom and to deliver it to the reader with touching beauty and sincerity.  In Wind, Sand and Stars the nugget was “The meaning of life is not discovered; it is constructed.”  In The Little Prince it is “All that is essential is invisible to the eye.”  As I tell you these nuggets I know, and I want you to know, that I have given nothing away.  Grasping the true wisdom of these aphorisms is impossible without reading the books; and the beauty of the books, in keeping with the wisdom of the latter quote, is invisible to the eye.

Although The Little Prince is often billed as a children’s book, it seems to me better suited to adults.  Well, maybe not “better suited.”  Let’s just say that there is lots going on in The Little Prince that kids just aren’t going to get.  But if they did, it would be a better world we live in.

This entry was posted in Writing and tagged Saint-Exupéry, sand, stars, The Little Prince, Wind. Bookmark the permalink.