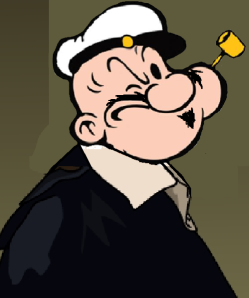 Noted philosopher Popeye Descartes, famous for his statement, “I think therefore I yam what I yam.”

I was recently accused of not being “indie.”  I could not have been more surprised and taken aback.  It felt like that earthquake a couple years back.  After thirty seconds of “What the hell is going on?” I finally figured out the earth was moving.

I got my feet under me fast and choked down my old man routine.  I wanted to say, “Listen Sonny, I was indie before the word was even invented.  I was self-publishing before you were born,  you snot-nosed little…” but I didn’t.  I very politely pointed out some of my indie street cred and got on with my day.  I didn’t convince him — I just won the argument.  Wherever he is, he still thinks I’m not “indie.”

Looking back, I feel stupid for letting that punk put me on the defensive and for giving a damn.   And I still wonder what it is about me that makes him think I’m not indie.

Am I not indie because I actually want to people to buy and read my stuff?  Because I respect my audience, consider them customers, and want to someday support myself by writing books?  Is it because I have an eBook in the top 20 at Barnes and Noble?  Or is it because I don’t wear deep-vee t-shirts or sleep in my parents’ basement?  Am I too old or too cheerful?  Too suburban?

I think that Mr. Indie E. Purist (his middle initial stands for “elitist”) must have been distracted by my clean shave, my mortgage, my lawn, or by my grand-kids.  He thinks that “indie” is about fashion, age, style, how much money you make, or how much money you want to make.  He doesn’t know that “indie” is simply short for “independent.”   I don’t have an agent, a publishing contract, or any endorsements.  I do not answer to editors, focus groups, C-level execs, stockholders, or investors.  I think that’s pretty damned “indie.”

And yes, to be honest, I’d love to land a publishing contract.  I’d like to have a book that I’m proud of on bookstore shelves all over the globe.  But even if that happens, I’ll never stop putting out my own stuff, unfiltered and raw, straight onto the web through cool partners like Smashwords.   If that happens — if I have one foot in traditional publishing and one foot in independent publishing — will I still be “indie?”

I think therefore I yam what I yam.

This entry was posted in Writing and tagged descartes, indie, popeye. Bookmark the permalink.