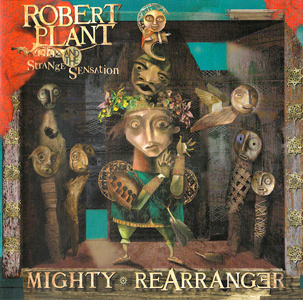 I don’t know why I never listened to this 2005 Robert Plant record, but I’m sure glad I did so yesterday — for two reasons.

First, it’s good.  Really good.  A mixture of blues, world music, and house remix tracks that somehow — to my utter amazement! — manages to homogenize instead of settling into oil and water.

Second, it’s deeply occult.  That’s refreshing, especially when actual, quality, mainstream occult rock is as rare as an honest politician.  Before you cry foul, I’m know that there’s lots of stuff that has pentacles plastered all over it or that makes overt references to topics and theories that some might call occult.  That’s not occult.  “Occult” means hidden.  You ought to have to dig a little!  Mainstream, quality occult rock is on life support.

Thanks to Robert Plant and the Strange Sensations for putting the paddles on it and shocking it back to life.

As proof that the record’s themes are occult I point out that the Wikipedia article totally missed them, saying only that, “It contains a blend of world and Western music influences, with mystical, oblique and somewhat cynical references to religion and destiny.”   Cyclical would’ve been a better word than cynical.  Clearly the occult material was too well hidden for most listeners to notice.

This record is an esoteric, audio grimoire on the natural, recurring cycles of personal and planetary evolution in general, and on The Fool’s Journey in particular.

How it Evokes Recurring Cycles

How it Evokes The Fool’s Journey

What’s the The Fool’s Journey?  As Eden Gray said when she coined the phrase “Fool’s Journey,” in her book “The Complete Guide to the Tarot”:

“The Fool represents the soul of everyman, which, after it is clothed in a body, appears on earth and goes through the life experiences depicted in the 21 cards [22 if you count 0 The Fool.  -ed.] of the Major Arcana, sometimes thought of as archetypes of the subconscious. Let each reader use his imagination and find here his own map of the soul’s quest, for these are symbols that are deep within each one of us.”  [Thanks to Mary K. Greer for the quote.]

Now let’s go spot The Fool’s Journey on the record.

This entry was posted in Mysticism, Writing and tagged review, robert plant, tarot. Bookmark the permalink.