The All-Seeing Eye and the Workout of the Week

Cabal Fang Workout of the Week #55 is a little jump rope conditioner followed by a meditation on the symbolism of the eye.

Ichthys symbol. Looks like a fish, or perhaps an eye, doesn’t it?

Freemasonry: Another version of the Eye of Providence (this one missing the pyramid)

Native American symbol: The eye of the medicine man, also known as the “wizard’s eye” in shamanistic circles. 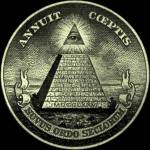 Great Seal of the United States of America. Compare to the Eye of Providence and the Philosopher’s stone.

Enlightenment Christianity: “The Eye of Providence”

Alchemy: The “squared circle” of the Philosopher’s Stone. The pupil of the greater eye is inside a square which is inside a triangle.

Hinduism: Ajna chakra, the “third eye” where the traditional red bindi is placed.

Middle East: the hamsa. A symbol of protection from evil. It’s almost as if it’s saying, “Stop — and pay attention!”

The Hand of Mysteries. Like the Hamsa, except there’s a fish in the palm instead of an eye. But the fish is the ichthys, which is the vesica piscis, so a fish is an eye. Sort of.

The Cabal Fang Workout of the Week

This entry was posted in Martial arts, Mysticism and tagged eye, WOOTW. Bookmark the permalink.