I just joined up on Goodreads. Here’s my first short review: http://www.goodreads.com/review/show/1294706189

Book Review: I’ll Never Get Out of This World Alive by Steve Earle 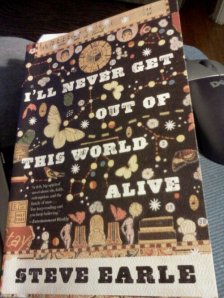 Steve Earle is a singer and a songwriter, a multi-instrumental musician with three Grammy awards and fourteen nominations.  I love Steve’s music and I sympathize with his politics and his sensibilities.

But Steve’s primary focus isn’t writing.  I didn’t hold out much hope that his novel I’ll Never Get Out of This World Alive, which came out two years ago at the same time as the record of the same name, would be that good.  The record turned out to be one of my favorites, one of those CDs that you can put it in and hit play without having to skip a single lame track.  I had the feeling that there was no way anybody could put write a solid novel while putting together a record that good, that somehow the book and the CD were too closely timed, that the book might have been put together in a hurry for promotional purposes.  Steve wouldn’t do that though, would he?  So I put off reading the book.

I shouldn’t have doubted him.

I’ll Never Get Out of This World Alive isn’t a good book, or a solid book by an outsider.  It is a great book by a writer who knows his craft.  In fact, I have to say that it’s the best fiction book I’ve read in recent memory.

Steve’s protagonist is Doc Ebersole, the physician who gave Hank Williams the morphine shot that killed him on New Year’s Day 1953.  An addict himself, Doc has lost his medical license and, ten years later as the book opens, is feeding his habit by stitching up bullet wounds, treating the clap, and providing abortions to hookers on the South side of San Antonio.  Haunted by Hank’s ghost and living from one shot to the next, Doc’s life is on the slow slide to oblivion until the day a Mexican gangster drags a poor girl named Graciela into his office — a table at the back of the local saloon — for an abortion.  As it turns out, Graciela is more by far than what she seems.

You will find ghosts and saints and spirits in this book aplenty, curanderos and priests, pushers and thieves, hookers and pimps.  But you will find no stereotypes, no tropes, and no easy answers.  There is only religion and redemption.  Not the holier-than-thou-bible-thumping kind, but magic and beauty of a sort that only a person who’s seen dark days can relate with perfect truth.

The secret to a great painting is not the light but the dark, the spaces between and behind, the chiaroscuro that pushes the figures into the super-real forefront.  This book is a painting by Goya, a dark canvas with bright figures shining.

Steve Earle Put on a Heck of a Show

The line for autographs was long.  Morgan and I waited patiently.  People were hugging him and getting their pictures taken.  I watched him paste on a smile and pose for each person.

It was my turn.  I held out a book and CD for him to sign.

“Nobody shoots straighter or tells it truer than you do Steve,” I said.  “Thanks for what you do.”  I stuck out my hand.  He shook it and said thanks.  “Travel safe,” I said.

Morgan wanted to know why I didn’t ask him to pose for a picture.  “He’s an artist, one of the greatest poets of our time, not a trained monkey.  I didn’t want to make the man pose.  I just wanted to say thanks.  That was more important than the autograph.”

Steve, for pouring out your heart and sweat and honesty for almost three hours the other night, for your tireless dedication to hard-working everyday folks like me, for a body of work that includes activism, music, literature, film and television, my sincerest thanks.  You’re the outlaw poet of my generation and it was an honor to shake your hand.