Ghilani: a ‘Conlang’ for Ghouls 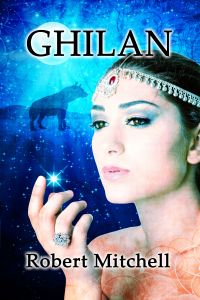 For my most recent novel Ghilan I developed a constructed language (‘conlang’) known as Ghilani.  I did this for several reasons — not the least of which is that conlangs are fun, and I always wanted to try it.  But mainly I created it to give dimension to the creatures know as ghilani (singular ‘ghul’).

Simply put, Ghilani is the language of ghouls.

For reasons that are an important part of the plot, Ghilani is a pidgin.  It is most heavily influenced by Arabic (Classic and Andalusian), Coptic, and Ancient Egyptian, although you will find elements of other tongues.  The novel contains an abbreviated grammar and lexicon included as an appendix.

The complete lexicon of over 600 words remains unpublished, but if there is enough interest on the part of ‘conlangers’ I’d be happy to put it up somewhere.  Just comment here and I’d be happy to oblige.  Bear in mind though, I’m not a professional linguist.

Just to give you a feel for the language, here are a few Ghilani colloquialisms:

suksumut labkin biber matar talabi – “On which pathway did your mother eat your placenta?” The equivalent in English to “Where are you from?”

khobah parlar – Lit. “Speech entombs.” Said as one might say, “Don’t speak; let us sit quietly and enjoy the moment.”

astamur hsskurhinar sultan – “The monarch proudly leaves the marrow.” This proverb expresses the general disdain ghilan have for the wastes and excesses of rulers of all kinds. The marrow, though hard to get at, is the most nourishing part of prey.

urztil sakhir somnox – “Night-sleepers ridicule the anus.” For scavengers, the anus provides easy access to the internal organs of any prey animal, regardless of the relative toughness of its hide. An accusation of cowardice when spoken from one ghul to another, or a general comment to on the squeamishness of humans.

nitsultan khotn onusas – “Blame the clothing, not the chieftain.”  Expresses the folly of those who blame the individual rather than the uniform, the traditions if you will, that dictate a chieftain’s actions.

This entry was posted in Writing and tagged ghilan, ghilani, ghoul, ghul. Bookmark the permalink.

4 responses to “Ghilani: a ‘Conlang’ for Ghouls”