It’s been a busy summer all around, and I haven’t had the chance to have much one-on-one time with the kids.  They’re mostly all grown up now with kids of their own, and it’s getting harder and harder to get more than a few minutes together.

I work out with my son once a week, but with my daughters it’s tougher.  Tiff’s in school and has a lightning bolt for a daughter, but we’re penciling something in soon.  Saturday I saw Suicide Squad with my middle daughter, Amber.

And Sunday I snagged a daddy-daughter day with Morgan, my youngest kid who goes off to university in two weeks.  When I asked her what she wanted to do, she said she wanted to go for a walk down at what the kids simply call “Texas Beach.”  In stuffy grown-up language, this is North Bank Trail and Texas Beach entrance to City of Richmond’s James River Park System.

When this punk was 3′ tall I used to walk her all over the parks and trails of our city and county.  I still remember her sense of wonder the year in early May when we solved the mystery of the falling tulips together.  That was at Echo Lake.   Every few minutes as we walked the trails, a blossom would fall down, seemingly from heaven.  I knew of course where the mysterious blossoms were coming from, but I let her figure it out on her own, feeding her clues.  Eventually we found ourselves at the foot the biggest tulip poplar you ever saw, easily 100′ tall and too thick for us to join hands around.

So we put brackets on this segment of her life’s grand adventure, ending this little phase as we began it — walking in the woods hand in hand. 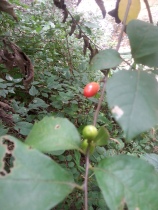 The view down from the walkway over the railroad tracks

A spider web in the sun. 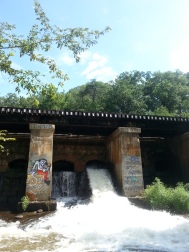 Another cool picture of the locks.

A pentagram of sorts scrawled on the rocks near the locks

This entry was posted in Writing and tagged family, nature, parks. Bookmark the permalink.