Three Realizations and Your WOD

It’s funny how, if you don’t give up, your spiritual and intellectual vision gets ever more acute and insightful.  I think that’s what they call wisdom?  Anyway, I’ve had several significant realizations lately, all of which coalesced after reading the Alan Watts book and the D. W. Hauck book.

And those realizations, in no particular order, are: 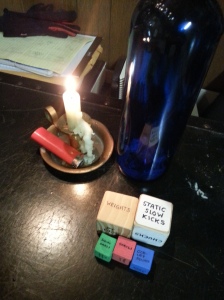 And now for your WOD, which is a “mega-Tabata” that will take you 24 minutes.