If you like what you read here on this blog, you should maybe look at some of the books and other stuff that I sell.  Seems to me that you might like them.  Plus, my merch isn’t expensive, and the quality is good too.

Also, I’m a nice guy.  So it’s okay to give me your money in exchange for my fine wares.

As I mentioned the other day, my eBook sales are up markedly.  So I decided to go and see if I made the Top 100 anywhere.

Obviously it’s my martial arts books that are most popular — and I’m very proud and excited about that — but I’m a little bummed about my how my fiction is performing.  Do I suck at fiction?  Or is it just that I’m a smaller fish in a larger pond when it comes to the fiction market?

Hopefully The 14th Mansion will break out and change all that.  Fingers crossed.  Release day is tomorrow, and the anticipation is killing me…

As you know (how could you not, what with my non-stop screaming) I have a new eBook dropping on 7/1.  And I want everyone on the third planet from the Sun to go preorder it at B&N, iTunes, Smashwords, etc. And I’m asking you (actually I’m begging) to help me get the word out.

Did you just say, “What’s in it for me?” Well, glad you asked!  All you have to do is reblog this and I’ll add your blog name to the dedication of my next book. So, actually, you’re kind of supporting yourself.

Yeah, it kind of does, doesn’t it? So go ahead: reblog this!

Last week I announced that my new book The 14th Mansion releases on all the major eBook outlets on July 1st.  I started a promotion — free downloads of the two previous novels for everyone who pre-books (<—click here for links to the most popular sites).

Look, this is your chance at a slice of immortality.  And, if that’s not enough, when I hit the big time — I’m on the NY Times Bestseller list, sitting across the desk from Jimmy Fallon and what-not — you can say “You know that writer who hosted SNL last night?  He dedicated a book to me!”

So go ahead.  Prebook.  Put your name in the comments over here and get your free downloads.  Re-blog and re-tweet so you can live forever in a book dedication.  All for the low, low price of $3.99.

My best #novel yet. Preorder it and get free stuff. RT and I'll add your name to the dedication of my next one…http://t.co/XuCqv3Gxiq

Pre-order my New Book and Get Free Stuff 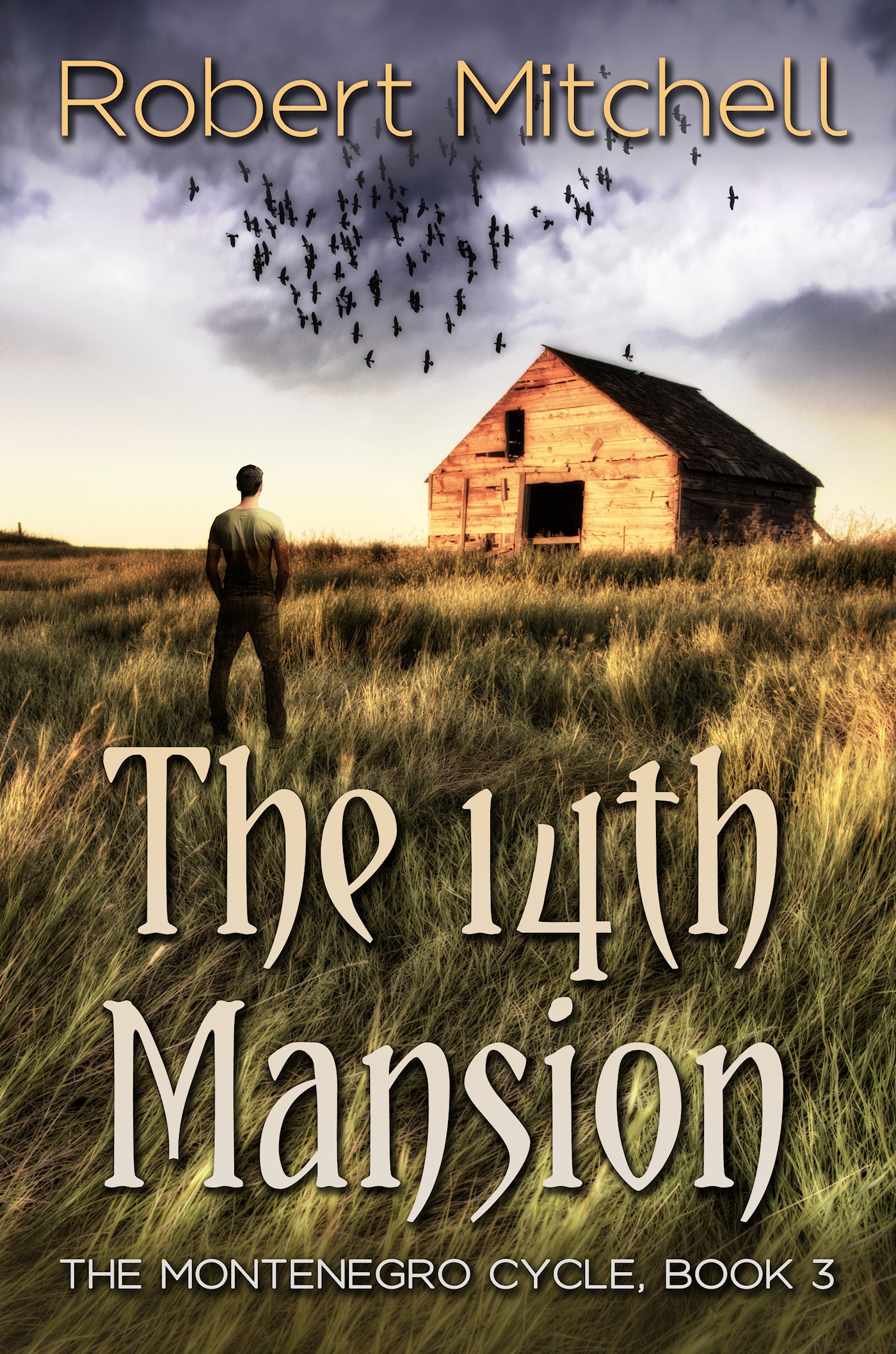 You should go and pre-order my upcoming horror and occult mystery thriller The 14th Mansion right now.  Why?  Because it’s good.  But, if you need a better reason than that, I’ll give you free stuff.

The way I see it, you blog-follower-pre-ordery-type people are my most loyal fans, so I should do something nice for you, right?

All you have to do is go pre-order the book by clicking one of the links at the bottom of this post and then make a comment below.  Make sure you check the box that allows you to follow subsequent comments.  On release day — July 1st — I’ll post a coupon code in the comments of this post that will allow you to download the other two books in the series free at Smashwords.com!  If you’re such a hardcore fan that you’ve already read the other two, just say so and I’ll send you an envelope full of real live actual ‘zines — booklets, short stories, and other print items written by yours truly that you can’t get any other way (unless of course you run into me at Richmond Zinefest or if you come to DC Zinefest this August).

Are you still here?  What are you waiting for?  Here are links to the most popular places you can pre-order The 14th Mansion.

“The 14th Mansion” is the my newest book — the 3rd and final installment in the Montenegro Cycle. Preorder is now open at Smashwords.com.  Major markets on 7/1/14.

The 14th Mansion is now open for pre-order at Smashwords.com.  Coming in at 85,000 words (slightly longer than Rowling’s Harry Potter and the Chamber of Secrets, and not quite as long as Orwell’s Nineteen Eighty-Four) it is the third and final book in the Montenegro Cycle, and in my opinion my best fiction work to date.

Release date is 7/1/14.  It will be available in all the major eBook markets on that date.  If you think you want to read it, go pre-book now so you won’t forget!

“Four years ago the Montenegro family overcame a clan of soul-consuming ghouls known as ghilan. They haven’t seen or heard from the creatures since. But now their son Ergie is missing and the police have no leads. Out of options, Ergie’s parents Monty and Debbie turn to three unlikely trackers for help — Billy, the gruff repo man and biker, Gator the homeless mute, and Tonya the psychic and former con artist. Can these three troubled misfits find their missing son? And if they do, will they uncover another plot hatched by the devious ghilan or some other even more terrifying evil?”

Another Update: The 14th Mansion

Rough draft was supposed to be done by 5/15 and it wasn’t.  Finally got it wrapped up in August.

Then I gave the rough draft to my editor (a.k.a. my wife) and she said there were some fundamental flaws.  Let it sit for a month, went back, and found out she was being nice.  It’s a worthless, steaming pile of cow dung.  It’s gonna take an additional five thousand words and some serious rearranging to make it right.

Sorry fans (all three of you), this thing isn’t going to be out until first of the year.

I was supposed to be done with the next book — “The 14th Mansion” — by 5/15 and I’m not.  I let things interfere, and that was dumb and regrettable.

Sorry guys, release date is probably going to be September/October instead of July.

Next Novel Behind Schedule (and a little teaser)

Somehow I’ve managed to get behind on the next novel.  It’s not like this is my first book, but it’s still hard to hit the 1,000 words per day quota when you’re working a full time job, participating in a martial arts club, raising kids, maintaining a blog (and whining about how you’re behind schedule), etc.

Time to buckle down.

This is going to be a bigger book than the last one, and not just in terms of total words.  It’s got more characters, more layers of perspective, and more complexity.

The 14th Mansion is story of three unlikely characters — a homeless man, a biker, and a witch — trying find a lost college student who may have fallen prey to a serial killer.  It has strange plot turns, twisted villains, occult themes, sex, profanity, and at every moment the threat of violence and doom.   It’s a dark book punctuated with points of light in the form of humor and the possibility of redemption.

And if I can get back on schedule, it will be released in July.

Writing Progress Report (and some perspective)

I’m a little behind the plan on the new novel, but after some extra writing time Friday night, I’m starting to catch up.  The 14th Mansion — which features characters from both of my previous novels by the way — should come in around 80,000 words.  Which means I’m more that a quarter of the way through in just 30 days.

I also entered a short story called Ms. Ishmael’s Box in a contest over at Litreactor.  So far the story has a 100% positive rating.  The prize?  A chance to get feedback from lots of great writers (including Chuck Palahniuk).

Speaking of Palahniuk, here’s a quote from the movie Fight Club which was based on his novel of the same name.  It leads nicely into what I want to talk about next:

“This is your life, and it’s ending one minute at a time.”

One of the things that has made writing for more fun and easy is my perspective.  Since putting my books up on Smashwords last year and really taking the plunge, I’ve used my martial arts training and knowledge of the occult to turn my perspective inside-out.

When I was younger, becoming a successful author seemed like an impossible task and an unattainable goal.  But now I see that if you want to be a writer, you just be a writer.  This applies to whatever a person wants to do or achieve.  I redefined the phrase ‘successful author.’  A successful author approaches the craft of writing with sincerity and writes stuff that people enjoy reading — no more and no less.

Defining success in terms of money is a trap.  Money is not lived.  Life is lived, and it is fleeting; it wants to be spent in the practice of whatever craft that beckons you.  This is your life, and it’s ending one minute at a time.

Whatever it is you want to be, I suggest you become it today.